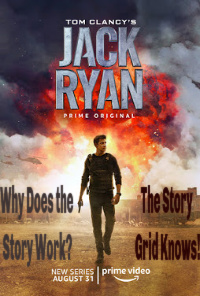 This post analyzes the Amazon Prime television series Jack Ryan using the 5 Commandments of Storytelling and the Editor’s 6 Core Questions from the book The Story Grid by Shawn Coyne.

This post will spoil everything about episode 5 from the Jack Ryan television series, so make sure you watch it before reading on.

The 5 Commandments for Episode 5

The first scene/ sequence begins with a chemical/biological team in protective suits opening the church door and discovering all the dead bodies and the device used to kill them.

The inciting incident for this episode is the Suleiman’s threat that ‘Paris is only the beginning’. This is definitely a threat of more terrorist attacks on the West.

Once again, there are multiple storylines happening in this episode, as in the previous, but the 5 commandments need to follow the protagonist, which is Jack Ryan.

There are a number of progressive complications that lead to the Turning Point of this sequence:

The turning point is when Ryan realizes that very few people know Suleiman’s brother is dead and that Suleiman might still communicate information by using the computer game they used before.

The Crisis Question is whether the CIA uses the game in the hopes to get more information and leads on the next attack, or don’t risk the communication in fear it burn their last link to Suleiman.

Ryan engages with Suleiman on the game.

Suleiman tricks Ryan into revealing that he is not his brother, but Ryan turns the defeat into a victory by determining that Suleiman’s wife has left Suleiman and is in the the refugee camp in Turkey.

This value shift is a -/+. In the beginning, Ryan and the CIA have suffered a defeat, Suleiman’s brother is dead, and they have no leads to the next terrorist attack. At the end, Ryan has established that Suleiman’s wife has left Suleiman and is in the Turkey refugee camp and might be a source of information on the next attack.

Inciting Attack by the Villain – this could probably be the Chemical/biological attack on the Church. This is a little late in the series, but it is the most significant attack of the series so far. The other attacks were the rescue and the suicide bomber, but they wee not an attack because they were conducted in response to the actions of the protagonist. We still have the threat of the big attack coming as well

Hero Sidesteps responsibility to take action – This occurred in the first episode, when Ryan states weakly “I’m just an analyst”.

Forced to leave ordinary world, Hero lashes out – Ryan is bored and decides to speak to the low value target (who actually ends up being the high value target)

Discover and understand the McGuffin (the enemy’s object of desire) – Ryan thought that Suleiman wants to conduct a large terrorist event against the Western World, but he doesn’t yet know why or what it is. In this episode, Suleiman actually threatens a larger attack, though Ryan still doesn’t know when or where.

Hero’s initial strategy against villain fails – Ryan fails to roll up Suleiman’s brother to get more information on the attack, first in Paris at the safe house, and second in episode 4 when he is forced to kill the brother.

Hero’s All is Lost Moment, when he must change his approach in order to salvage some form of victory – this hasn’t occurred yet. It’s possible this will be when or if Ryan is able to get a hold of Suleiman’s wife and use any information she can provide, his last desperate gamble to stop the next attack.

Hero at the Mercy of the Villain – Ryan was at the mercy of Suleiman in the first episode, but I expect this will happen again as both escaped.

Hero’s Sacrifice is Rewarded – this hasn’t happened yet.

The Power divide between the hero and villain is very large – Suleiman has secret contacts and operators everywhere and a secret network that he can secretly communicate with; also, very little is known about Suleiman and his motives. Ryan has to go through many levels of red tape to get things done.

Speech in praise of the villain – this was done in episode 1 and 2 when they discover who Suleiman is, what is rank in the terrorist organization is, and what he is trying to use the money for.

The love story between Ryan and the Doctor changes very little in this episode, except for one date where the doctor makes it clear she wants to keep it casual. Below are the Obligatory Scenes and Conventions so far in the series.

Lovers Meet – 1st episode at the party before Ryan is whisked away by the helicopter.

Lovers break up – this might happen, Ryan is forced to lie about his job and this might damage the relationship

Proof of love – not sure this will happen in this season

Lovers reunite – Might happen if they actually do break up, they might reunite at the end of the season

Triangle – might not happen since this isn’t the global genre, but the viewer did feel a connection with the French women detective before she was killed

Opposing forces – the doctor comes from a high status family, daughter of Ryans’ old boss who he pissed off, so this could definitely be a future opposing force. Ryan works for the CIA and can’t tell her about his job, also a potential opposing force.

Secrets – Ryan’s secret about his work

Rituals – none really so far

Moral Weight – Ryan is not comfortable with the lying

Once again, this isn’t the Global Genre, and this sub-genre plot might not meet all of the Conventions and Obligatory Scenes.

The story is exciting and full of action. I think if I had to identify the Beginning Hook at this point, I would say it runs from the start of the series to the attack on the church (the first terrorist attack by Suleiman). The Middle Build will probably be from the attack on the church until they discover the site of the next attack Suleiman plans. And the Ending Payoff will be trying to stop that attack from happening (probably just the last episode).