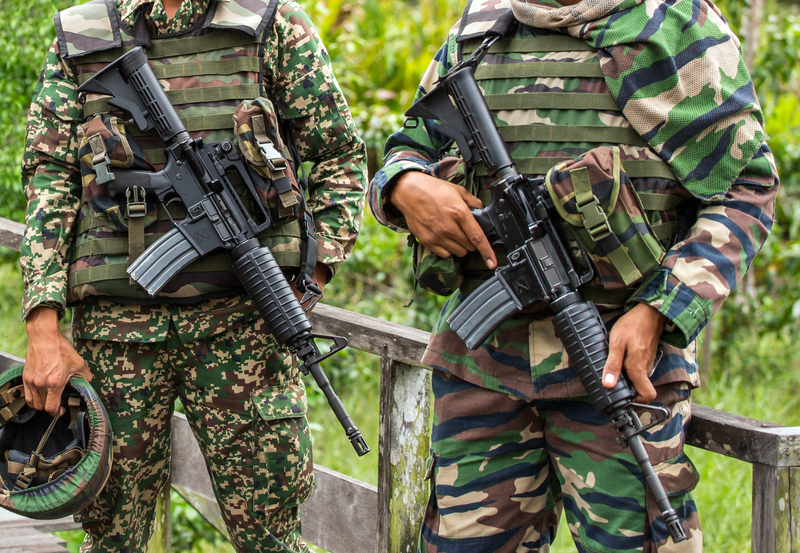 This post will be the first in a series. The U.S. Army uses lots of different weapons for different reasons. This first entry will discuss the basic rifle that everyone uses.

The M4 Assault Rifle is the standard weapon currently used by the Army.

It is a shorter and lighter variant of the M16A2 assault rifle, which the Army still has in its inventory, though all combat troops are issued the M4. The M4 is a 5.56×45mm NATO, air-cooled, direct impingement, gas-operated, magazine-fed carbine. It has a 14.5 in (370 mm) barrel and a telescoping stock.

There are a number of scopes available to attach to the M4 via its Picatinny Rail system which will make it more accurate at farther distances, but they are not standard issue. The normal sites are called iron sites which consist of a front site post that can be moved up and down, and a rear site aperture that can be adjusted right and left.

There are a number of Accessories that are used by the military (though not in all units) to include: not vision scopes, telescopic scopes, laser pointers, bipods, larger and smaller magazines, grenade launchers, shotguns, and front front hand grips among others. The top of the rifle has a Picatinny Rail that is used to change out scopes and sites.

See this article for a full description of the Picatinny Rail system.

See the following YouTube video for details about the Picatinny Rail system.

The following image shows the progression of rifles in the US Army, from top to bottom, the M16A1, M16A2, M4, M16A4 (primary weapon for the US Marines).

The M16A1 was used at the end of the Vietnam war. Studies showed that US servicemen wasted ammunition by spraying bullets on automatic mode. After Vietnam, the Army adopted the M16A2 which did not offer an automatic mode, and instead used a 3 round burst. One of the biggest visual differences between the two rifles is the shape of the front hand guard: the M16A1 has triangular hand guards, and the M16A2 has round hand guards.

In the mid 1990s, the Army began to adopt the M4 rifle. They chose the M4 over the M16A4 because of the collapsible butt stock, which they believed helped soldiers in close quarter combat and also made the rifle lighter. The US Marines have adopted the M16A4 rifle.

There are still number of M16A2 rifles in the Army inventories, and many National Guard and Reserve Units still have them instead of the M4 rifles. Only a few regular Army units still use the M16A2 rifle, most have adopted the M4 Rifle.

If you have any questions or comments about Army rifles please submit below. Next week time we’ll discuss the other standard issue weapons for infantry unit such as machine guns, grenade launchers, and pistols.