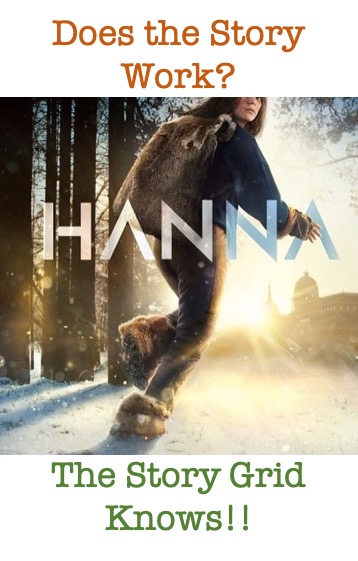 This post analyzes the Amazon Prime television series Hanna using the 5 Commandments of Storytelling and the Editor’s 6 Core Questions from the book The Story Grid by Shawn Coyne.

This post contains spoilers from the Amazon Prime television series Hanna, so make sure you watch the show before you read further.

This is the midpoint of the series/ story. If this was a novel, something significant would change here, usually a ‘false victory or a false defeat’ according the Save the Cat! Writes a Novel book written by Jessica Brody. And I think we have that at this point.

Since Hanna’s escape from the safe house in episode 2 (at the beginning of the middle build for those of you who know the Story Grid process), the value change of the story has been going progressively toward the negative.

Additionally, it will be very difficult for Hanna to return to the same relationship she formally had with Eric, blind devotion. This is a classic progressive complication.

So, what are the 5 commandments fo Episode 5?

The 5 Commandments for Episode 5

Hanna has made it to the UK and is hiding in Sophie’s camper.

This episode is a reset episode, setting up the new world Hanna has been thrust in. Hanna is on the run with no goal/ objective. She can’t trust her father, she can’t trust anyone, and the only person she really knows is Sophie. Hanna is learning about the real world, about herself, and about relationships – friendships and romantic.

The turning point actually happens away from Hanna, though ultimately it will affect her life. The turning point happens when Jerome threatens Dieter’s family if he doesn’t betray Eric. This is important because Eric is wounded and has no way to find Hanna, but due to this turning point/crisis/climax, he will gain access to this information in order to eventually find her again.

Does Dieter betray Eric and protect his family or not?

This value shift for the episode as a thriller is a -/–. The stakes are raised again. It is even more unlikely now that Eric will be able to find Hanna and explain the truth to her.

The value change for worldview is -/+. At the beginning, Hanna is lost in this new world. In the end she has made a romantic connection with Anton, experiencing what it means to be human and a real person. We, as an audience, now that this will affect her friendship, but at the end of this episode we feel good that hanna is maybe becoming more ehuman.

Conventions and Obligatory Scenes for the Action Genre

Hero’s initial strategy against villain fails – Erik loses control of Marissa and is wounded, his team must now find Hanna and make a new plan (episode 4).

Hero’s All is Lost Moment, when he must change his approach in order to salvage some form of victory – This may be the actual al is lost moment. Hanna is isolated, about to lose her only friend and Eric is captured so he can’t help her.

Hero at the Mercy of the Villain – Too early yet.

Hero’s Sacrifice is Rewarded – Too early yet

The Power divide between the hero and villain is very large – Hanna is alone, with only her father’s training; Marissa has many resources and men and an agency behind her

Speech in praise of the villain – To early yet, though Erik has warned Hanna that Marissa is dangerous.

I still think this works as a thriller, the scenes are definitely turning on life and death. The internal worldview theme is working as Hanna discovers more about her origins and herself. Expect there to be a scene where Eric tells Hanna about the agency that Marissa works for, a real ‘speech in the praise of the villain’. I think we have reached the all is lost moment. From here, I expect Eric and Hanna to somehow reunite and solve the mystery of Marissa’s agency for the viewer. We don’t know how this will end yet, whether in a grand shootout (I hope not, I would like something more thoughtful to happen. No lazy writers please!!)

For more information about the Story Grid, go to the Story Grid Webpage where you will find free videos and articles on how to implement the methodology.