Treadstone E2 – Does the Story Work? Not Really! 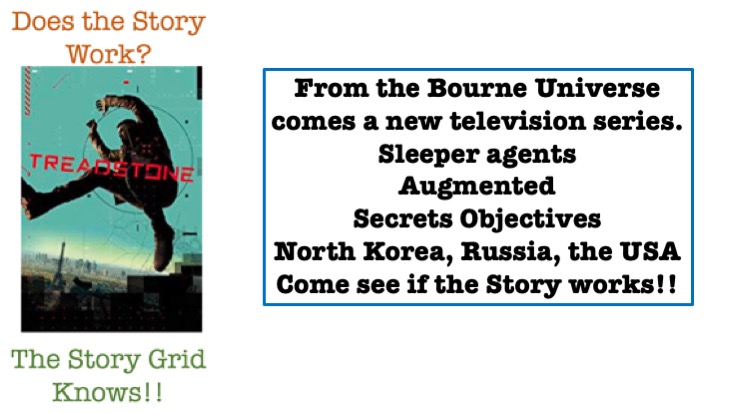 This post analyzes the USA Network television series Treadstone using the 5 Commandments of Storytelling and the Editor’s 6 Core Questions from the book The Story Grid by Shawn Coyne.

Does the Story Work?

I have watched three episodes so far, and my honest opinion is: no.

My expectations given the previous Bourne movies was some good quality action/ fighting scenes. I don’t feel that the series has reached the level that the movies were at. I wasn’t excited about any of the fighting scenes, except maybe the one in the bar in Alaska.

If the screenwriters had gone in a different direction, following a form of the Bourne books, I could have accepted that. It would have been a little less action and more espionage, but that would have been fine. But the espionage/ secrets here are too many and confusing, so in my opinion that have failed there as well.

But really, the worst part of the series, is I just don’t care for the characters. There are too many and then there is the additional complication of the second timeline. I really can’t keep track of the characters, I don’t even really know any of their names.

How could they have done better?

As I mentioned in a previous post, they could have stuck with just one character in the beginning – for the first or second episode, before waking up other sleepers.

The series Hanna does this very well, we get to know Hanna and her father before introducing other characters from different storylines. The same with Killing Eve, there are a number of characters (Eve has all the MI5 and MI6 staff and Villanelle has Constantin), but there are only two storylines so it’s easier to keep track of who belongs to which world and you can ease into the different characters.

In Treadstone – you have Frank from the past who has a number of CIA buddies. There is Petra from past and future who has a boss and a husband. The journalist Tara who saves the N Korean girl. The CIA contacts for Tara. You have a number of leaders in the CIA in DC. There is a whole storyline of characters in N. Korea. Now there is another bunch of characters in India. And there is another storyline of characters in Alaska and Kentucky. So, by my count, you have 7 storylines that will inevitably collide at some point, but we’re on episode 3 and they haven’t really. How much screen time is any one character getting really?

Right now, I personally haven’t witnessed any OMG moments that make me think this series will stand out. I predicted the wife in Kentucky being some kind of agent before it happened, so a lot of tropes that aren’t satisfying.

Sorry for those of you who liked it, but I won’t be watching any more or reviewing anymore episodes. Too bad, I had some high hopes for the series.

Next week though, I’ll start on the new Jack Ryan series. Hopefully, they stepped up their game.